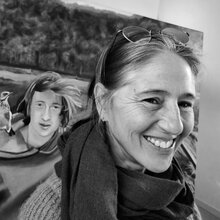 By observing Laurence Durieu’s paintings we enter a fantastic world. In her scenes she integrates characters who are rather dreamy and surrounded by animals. By adding some small details she brings the attentive observer back to the reality and tries to get him out of his imagination.

The elements that compose her artworks come from her family circle, with landscapes of Flanders which is the place where Laurence lives and works. When creating a composition, she observes and takes pictures of real life situations and combines them with childhood memories.

When she was five years old, she used to listen to a vinyl record of the Petit Prince of Saint-Exupéry told by Gérard Philippe. “I was impressed by the extract where the Fox proposes the Petit Prince to tame him and create a unique link. This has triggered something magical in me. I have never seen animals the same way since that day. They all seem to have become very close and familiar and I was convinced that it was possible to create a special relationship with them. By chance, a few years later we fed a baby jackdaw bird who became tamed. He was free to enter and leave our house. Our relationship was unique. One day he came to say goodbye to us before leaving with his fellow jackdaw friends. This confirmed my thought and dream that it was possible to create unique links with animals.”

Laurence Durieu, born in 1972 in Brussels, lives and works in Meise near Brussels in Belgium.